More than 300 cyclists of all ages enjoyed Ealing’s sights by bicycle as they took part in guided rides to celebrate National Bike Week.

Ealing Council hosted free guided bike rides throughout Sunday, 23 June giving around 350 cyclists of all ages and levels of experience, the opportunity to join the 11 mile rides led by experienced marshals.

The rides started at Gunnersbury Park and Churchfield Recreation Ground and the route included roads, the canal towpath and through parks. Bicycles were checked for roadworthiness before they set off.

Ealing Council leader Julian Bell and cabinet member for environment and transport, Bassam Mahfouz – who are both keen cyclists – joined a ride from Hanwell.

Councillor Bell said: “I’m delighted that so many people took part in Ticket to Ride. We wanted to boost cyclists’ confidence on the road and show them what an easy and enjoyable way to get fit and travel safely around the borough, cycling can be.” 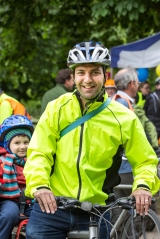 Councillor Mahfouz took his three-year-old son Alexander on his bike. He said: “It really was a great day out for families and an event we would like to hold again. My son, like lots of the other children taking part said he really enjoyed it. We received lots of positive feedback on the day with some parents telling me that they’d enjoyed it so much that they planned to go on more cycle rides as a family activity.”