Ealing Council and Greenredeem, the company that rewards people for everyday green actions, today celebrated the one year anniversary of the residents recycling scheme launch. Over the past 12 months the initiative has helped boost the council’s recycling rates across the borough to 45%. 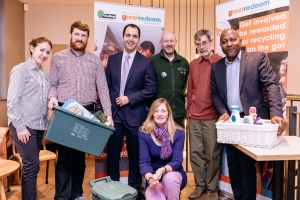 To celebrate the local achievements, Greenredeem and Ealing Council held a celebratory breakfast at Harris and Hoole, a Greenredeem reward partner. Attendees from across the borough included Hanwell Honeypots and the Greenford Park Residents’ Association (GRPA),two local community groups that have been recipients of Greenredeem donations from points donated by local residents signed up to the Greenredeem Scheme. Greenredeem members and local bloggers also attended the event to celebrate the scheme’s success to date.

Nearly 2.2m points have been generously donated by local members, to local community projects, which equates to over £10k in grants made. The GPRA were the first community project in the borough to reach its donation goal and benefit from the Residents’ Rewards Scheme. The GPRA received a new oven to allow the community group to offer offer local teenagers and children cookery lessons with Kiddy Cook.

Councillor Bassam Mahfouz said said: “Ealing Council is committed to cutting waste and supporting green action in the borough. The success we’ve seen from the Greenredeem residents reward scheme highlights that incentive based schemes work and are a vital way to reward those households that support our community efforts. We are proud to celebrate the cycle of positive green action and community good that has been created in the borough.”

“We’re delighted at the success of the residents reward scheme over the last year. The enthusiasm of the local community to undertake green actions has been outstanding,” said Rob Crumbie at Greenredeem. “We’re looking forward to continuing to build on this over the coming months and years to further improve the local environment, as well as further help local businesses and community groups.”

All residents in Ealing can be rewarded for recycling by going to Greenredeem.co.uk and pledging to recycle their food waste. Points earned from recycling can be converted into vouchers that can be used in local businesses such as Harris and Hoole, Gurnell Leisure Centre, Zayka, Cinnamon on the Lane, Hungry Yeti and Toni & Guy.